Sometimes an entire city can feel like an ajeebghar, a museum of wonder.

Sell your soul to get to Edinburgh during the Fringe Festival. You’ll find it there again, I promise. Over and over again. And it won’t sneak up on you quietly either. Expect high drama at every turn and you won’t be disappointed.

For this is a decidedly dramatic city. A physically dramatic city. When I took the train up from London, a friend advised me to sit on the right side for the views and indeed, that first glimpse of the North Sea along the Scottish coastline is gasp-worthy.  But stunning as that is, it merely sets the stage for Edinburgh’s brooding, craggy beauty of contrasts. Which other edgy, Trainspotting, 21st century city on the planet whose identity is forged in Celtic history and a literature-soaked, Scottish Enlightenment past can also boast an extinct volcano and glacial fjords (the Firth of Forth!), lochs and leiths, crags and tails, medieval castles in Old Town, a Georgian-era planned New Town, green belts, four botanic gardens (including the astonishingly beautiful 400 year old Royal Botanic Garden, the subject of my next post), screeching seagulls, salt air and that sexy brogue, the world’s best single malt whiskeys and most notorious dish of offal (yes, haggis, I mean you. you weren’t so bad after all), sheep and salmon, mud and fog, gentle mist and violent storm.

And then there are the museums, my ajeebghars of choice, offering their own dramas and histories of Edinburgh. So many superb world-class museums, many of them funded by the city, strewn along the Royal Mile or the Waters of Leith, a green, gurgling riverside walk that made our eyes ache with the beauty of it all. The National Gallery of Contemporary Art (where we saw a definitive exhibition on Surrealist Art). The Surgeon’s Hall Museum (which in its heyday included the offices of Dr. Joseph Bell, inspiration for the character of Sherlock Holmes). The whimsical Museum of Childhood. The tell-it-like-is Museum of Edinburgh. The cozy little Writer’s Museum. The People’s Story Museum. The John Knox Museum. The Scottish Poetry Library. The cavern-like National Museum of Scotland (where we saw the blockbuster exhibition Celts: Arts and Identity). And on and on. 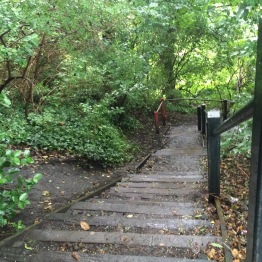 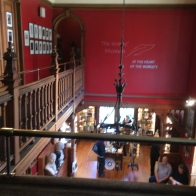 Years ago, as an avid follower of book art, I’d read about the famous Edinburgh book sculptures – eleven exquisitely crafted paper sculptures that were made by a single artist, and gifted anonymously to museums and libraries of the city, each inspired by a Scottish literary masterpiece – Treasure Island, Peter Pan, Lanark etc. The artist was nicknamed the Banksy of Books, and the rapturous press often focused on the books that inspired these 3D love letters to reading and ideas. Now, after tracking down some of these delicate paper dioramas and seeing them in the flesh (or is it woodpulp?), I had a flash of insight. Yes, they are paeans to reading and to books, certainly, but they are also paeans to Edinburgh’s ‘special places’. I understood why the artist may have wanted to pay such generous homage to the city’s extraordinary museums, cultural and literary centers in the first place. For they are that extraordinary, that deserving.

To say nothing about the friendliest, most helpful people you could hope to meet while traveling. This isn’t a place for sauntering – people stride purposefully here, even uphill, often with walking sticks. And it isn’t easy to get lost; the city is remarkably compact and walkable. But just open up a phone map, even, or look a little geographically confused, and at least three gentlefolk will descend on you – mid-stride – to ask if you need help, and then go out of their way to show you the way. Even if you’re climbing what seems to be a straight path upwards to the charmingly named Arthur’s Seat.

And I haven’t even touched on the Fringe yet. Oh Fringe Fest, you lovely cultural beast, delight for the artistic soul. Called the biggest performing arts festival in the world, it is monumental when you think of its sheer range, diversity, and raw creative energy. A staggering 50,000 performances of 4000+ shows in more than 200 venues all over the city. We were told, depending on who did the telling, to either watch out for the crowds, or to revel in them as they’d remind us of crowded Indian cities. And indeed, there are buskers and flyers everywhere, performers, comedians and magicians doing their business on each cobbled corner of the Royal Mile. It seems that the entire performance art world does gather here on annual cue, or at least its more adventurous and experimental fringe (which was the whole point when the Fringe Fest began convening more than 50 years ago) 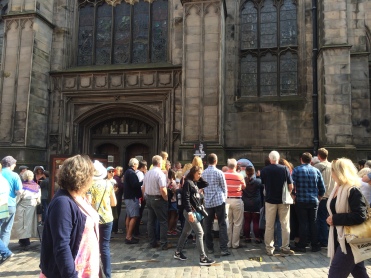 The performances are uneven in quality, of course, and there have been recent criticisms that the Fringe Fest has lost its edginess, its discernment; that it now accepts everything that is submitted. But there can be absolutely no quarrel about its range, and the transformative potential of seeing that volume of theater at such close quarters.

In just five days of Fringe-ing, we saw a mind-boggling array of as many performances drawn from around the world: local comedy acts; a flamenco guitar concert (flamenco fusion -the fabulous Ricardo Garcia); a gorgeous one-man play of a Tolkien short story (Leaf by Niggle) by Edinburgh’s best known puppet company held at the Scottish Storytelling Center; a book reading by Ian Rankin (Ian Rankin!) to launch his latest Inspector Rebus crime novel; and by Alexander McCall Smith, whose 44 Scotland Street series celebrates the city; and a debut Fringe performance by the Open Program of the Workcenter of Jerzy Grotowski (The Living Room); at Summerhall, an arts center that was once the Royal veterinary school, its stages once fabled anatomy theaters! And that, as we quickly found out, seated high up in a room that could have stepped out of Rembrandt’s painting (of the anatomical theater), is half the charm of both the city and the Festival – the dramatic staging! Old spaces mesh with the new so seamlessly, so unselfconsciously, that before long, we – the newcomers on the scene – were able to point to what we thought was the real thing, the soul behind the city, the many historical layers beneath its skin, flung like a mantle across seven hills.

Walking around on a golden Edinburgh August from one beautifully organized festival to another (Book Festival to International Festival to the omnipresent Fringe) spread across Old Town and New Town, and across the waters of Leith, we wondered if this was the closest we might get in our modern times to experiencing a medieval fair.

What a city. Edinburgh. Eidyn burgh. Auld Reekie. I can’t say enough good things about it. And so I won’t. But since this is one of those cities that has always attracted uncommonly fierce emotions, perhaps the last word should go to Robert Burns, its favorite 19th century poet, given his passionate declaration that began:

“Edina! Scotia’s darling seat!
All hail thy palaces and tow’rs;
Where once, beneath a Monarch’s feet,
Sat Legislation’s sovereign pow’rs:
From marking wildly-scatt’red flow’rs,
As on the banks of Ayr I stray’d,
And singing, lone, the ling’ring hours,
I shelter in thy honour’d shade….

If Burns’ sentimental ode sounds a tad embarrassing to our contemporary ears, I will say this: I get the fuss! I for one have been bitten by the Eidyn bug, and I’m going to try to be at Fringe Fest 2017. Raising a wee dram to toast that.