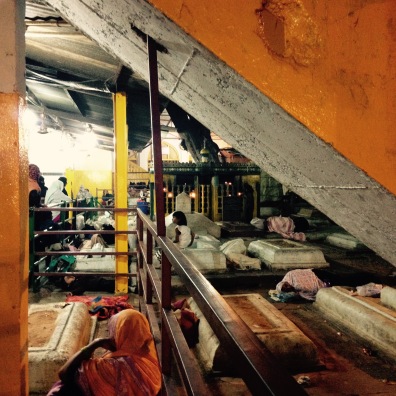 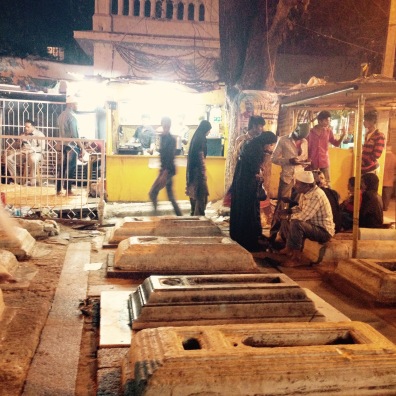 My Thanksgiving this year turned south and Sufi.  As always on Turkey Day, my thoughts flew to feasts (I confess an unhealthy obsession with pecan pie), family, and colonial encounters (good bad ugly). Which are hardly unique topics; such seasonal preoccupations are universal on T-day.  But because this year it coincided with my time in Hyderabad during Heritage Week – a series of organized walks to tombs, gardens, monuments in the city – I’ve also been thinking about accidents.

Accidents of history, accidental journeys, accidental heritage – what we leave and what we take away, what we call new and what we call old, what’s serendipitous and of our choosing.  And the fact that Thanksgiving owes itself to one of navigation history’s major accidents. Some four hundred years ago, a Genovese explorer in search of spice routes landed in the Bahamas thinking it was India – proceeding to massacre both the lands he mistakenly named, and its ‘Indian’ peoples! No Thanks there, Columbus.

And so on Thanksgiving Day 2015, four centuries and two oceans away from the New World, Roshni and I found ourselves in the old Old world of one of the oldest among Hyderabad’s active Sufi dargahs. We were in search of good qawwali and better falooda; it was also a goodbye trip of sorts for R that we’d been planning for ever, at least a year. Yousufain dargah in Nampally is named for the two 17th century Sufi saints buried there – Hazrat Yousufuddin and Hazrat Shareefuddin (better known as Yousufain and Shareefain) were brothers and commanders in Aurangzeb’s army who traced their roots from Shaam in present-day Syria. It is packed on Thursdays on account of their qawwali evenings, which culminated (or so we’d heard) with Hyderabad’s Warsi brothers who performed after midnight. In the end what we found was not what we had anticipated. The qawwali was mediocre (the Warsi brothers came only on special occasions, said the chappalwala). The falooda nonexistent (sabja/basil seeds were not in season, said the khoya seller). But the social life around the dargah, that sense of place, was extraordinary. And, it seemed, always in season; always on.

Post midnight, while the rest of Hyderabad slept and even the flower sellers were packing up their piles of genda phool, men and women (and there were plenty of women) around the dargah sat, sprawled, slept, yawned, talked, prayed, and ate into the wee hours; some listening quietly to the music, some facing the walls in contemplative prayer or furious study, one woman’s loud wails of despair tearing through our hearts like a hot knife through butter. So this, I thought, was what a lament must sound like. In what was the most moving show of support and commiseration that I’ve ever seen in a dargah (no, scratch that – that I’d ever seen. period) two strangers – or so it seemed – heard her wails, got up from the qawwali performing area and made their way, black burqas delicately held aloft to avoid the pooling garbage around the marble graves, to sit down next to her. Silently. Not touching or hugging her as she rocked in misery, no intrusiveness whatsoever, just a quiet show of commiseration that seemed especially powerful in that setting. A small gesture that spoke volumes. We’re all in this together, sister, the gesture said, on this crazy journey of suffering and illusion we call life. Can’t do anything about it but wail, or listen. Together. In social silence.
And so for those few minutes, in a noisy, neon-lit dargah in Hyderabad, for only the second Thanksgiving that I’ve been away from the US in 20 years, I gave my thanks. For sisterhood and new friends, who leave but stay in one’s heart. For falooda, in season and out, with sabja seeds or not. For qawwali, always, whatever the quality. Thanks and commiseration. For that wailing woman mired in her own deep unspeakable sorrow. For the fact that we’re all in this together. Because some days – given where we’re headed as a planet, really, what is there left to do but wail? And listen to each other.

After all, at the end of the day, its an accident of fate that we’re here at all. Cosmic serendipity, as Carl Sagan might say in his excited drawl. We’re just blobs of protoplasm on one among billions (and billiyuns) of stars – even if we may be dargah-loving, qawwali-listening, falooda-drinking, pecan pie-crazy blobs. On a spinning blue-green third rock from the sun that we call home. Thank you, R, sister blob, for crossing paths at our sanctuary at the Mpally CrossRoads. I will long think of us as the Gaulish holdouts against the Roman agent developers. Come back soon.